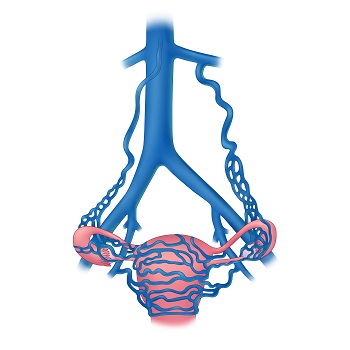 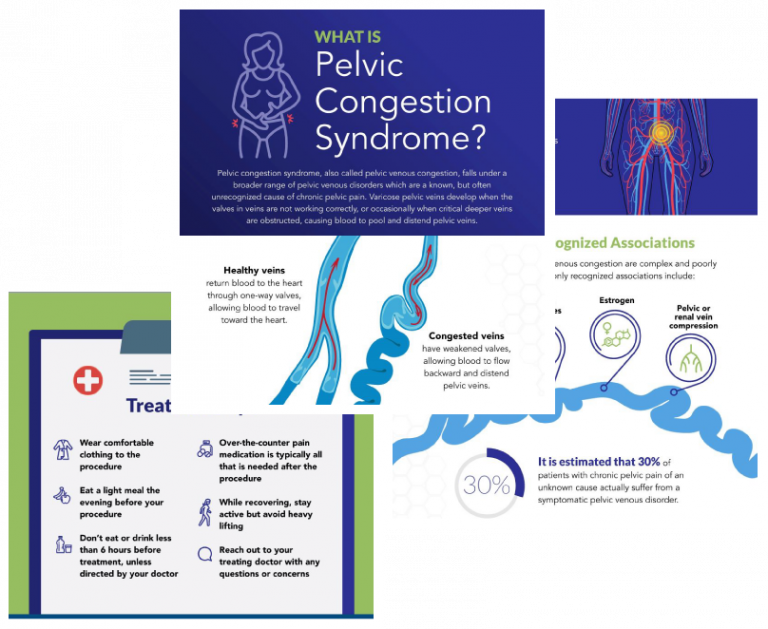 Download our illustrated guide to the diagnosis and treatment of pelvic congestion syndrome.

What Is Pelvic Congestion Syndrome

Pelvic congestion syndrome, also called pelvic venous congestion, falls under a broader range of pelvic venous disorders which are a known, but often unrecognized cause of chronic pelvic pain. Varicose pelvic veins develop when the valves in veins are not working correctly, or occasionally when critical deeper veins are obstructed, causing blood to pool and distend pelvic veins.

Occasionally, increased pressure inside pelvic veins may be the result of an obstruction in the major veins draining the pelvis.

It is estimated that 30% of patients with chronic pelvic pain of an unknown cause actually suffer from a symptomatic pelvic venous disorder.

What Are the Symptoms of Pelvic Congestion Syndrome?

Typical symptoms of pelvic congestion include:
• Dull achiness and/or heaviness in the pelvis, often made worse by prolonged standing
• Bloating sensation
• Pain in the lower back
• Visible varicose veins on the buttocks, vulva, and upper thighs
• Painful menstrual cycle with referred pain in the legs
• Increase urination frequency
• Pain during and after intercourse

How Is Pelvic Venous Congestion Diagnosed?

Because there are many other potential causes of chronic pelvic pain, medical professionals may conduct multiple exams and tests including:
• Pelvic exam
• Pelvic duplex ultrasound
• CT or MRI scan
• Laparoscopy

What are the Treatment Options?

Once a patient is diagnosed with pelvic venous congestion, it can often be successfully treated with a minimally invasive procedure called embolization. Pelvic venous embolization requires little or no downtime and is performed in an outpatient setting. Occasionally, a compressed iliac vein may contribute to venous congestion and a stent may be indicated to help restore normal flow. Embolization requires little or no downtime, is performed as an outpatient, and is minimally invasive but highly effective. After treatment, patients are typically able to return to most routine activities the same day.

• Wear comfortable clothing to the procedure
• Eat a light meal the evening before your procedure
• Don’t eat or drink less than 6 hours before treatment, unless directed by your doctor
• Over-the-counter pain medication is typically all that is needed after the procedure
• While recovering, stay active but avoid heavy lifting
• Reach out to your treating doctor with any questions or concerns 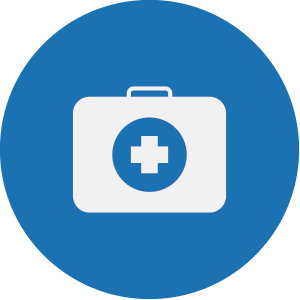 It is estimated that up to 30% of patients with chronic pelvic pain of an unknown cause actually suffer from symptomatic pelvic venous congestion. So how do you know if you have pelvic congestion syndrome? Classic symptoms and signs of pelvic congestion include:

Although the causes of pelvic venous congestion are complex and poorly understood, a few commonly recognized associations include:

Telehealth Consultations Available For This Condition

How is Pelvic Venous Congestion Diagnosed?

Unfortunately, pelvic venous congestion often goes unrecognized and untreated. Symptoms, physical exam and ultrasound findings have a high combined predictive value in diagnosing pelvic venous disorders. The ability of duplex ultrasound (DUS) to image real time makes it an important tool in the evaluation of possible pelvic venous congestion. Because there are many other potential causes of chronic pelvic pain, medical professionals may conduct multiple exams and tests including:

Pelvic ultrasound or other imaging studies such as CT are generally performed prior to treatment for pelvic venous congestion in order to exclude other possible pelvic disorders and to assess for anatomical variations which could affect treatment. It is important to note that a normal laparoscopy does not exclude the diagnosis of pelvic venous congestion.

The diagnosis of pelvic venous congestion is confirmed through an outpatient procedure called pelvic venography and treatment is typically carried out at the same time with a procedure called embolization. Embolization is a proven, safe and minimally invasive treatment option through which abnormal veins are closed using a combination of tiny coils and a sclerosing agent. Occasionally, pelvic venous congestion is caused by an obstructed iliac vein in the pelvis. In these cases, a stent may be required to open the abnormal iliac vein in order to restore normal flow out of the pelvis.

A pelvic ultrasound is generally performed prior to the venogram to exclude other potential problems with the ovaries or uterus. The diagnosis of pelvic venous insufficiency is then confirmed by a pelvic venography. If indicated, a minimally-invasive treatment called pelvic venous embolization can then be performed in order to relieve the abnormal pressure inside the pelvic veins. The venogram and embolization are performed on an outpatient basis and take about two hours.

The embolization procedure consists of inserting a thin, flexible, plastic catheter (or tube) into the jugular vein in the neck. Liquid contrast agent is then injected into the veins of the pelvis and special x-rays are obtained. These images allow the doctor to visualize the refluxing pelvic varicosities and seal them off using sclerosant and coils placed inside the abnormal veins. The catheter is then removed and a small dressing is then applied. After treatment, patients can often return to normal activity immediately. Non-coil embolization is also available.

IVC® is accredited by ACR and IAC